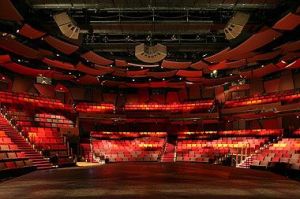 In my years at the Guthrie, one question was always asked me, ‘Doesn’t it get boring watching the same play over and over’?

It probably would if it was the same play over and over; but, while the script and blocking may be the same, it is not the same play each performance. Every performance brings something different, something that only is noticed by watching it over and over. There is always the interaction between the audience and the actors, sometimes a laugh line brings snickers, sometimes roars. An audience member with a loud unforgettable laugh can influence the audience, the actors.

And performances are often influenced by outside events. The only time I remember the Guthrie not started a play on time was the night the audience sat in silence while the voice of Richard M. Nixon was broadcasted live over the house speakers. When he started he was President Nixon. When he finished, he was ex-President Nixon. And at the end you could hear a collective sigh from the audience. The national soap opera was over at last. I did my cues on autopilot that performance, and I am sure the cast and audience felt the same numbness.

And the unexpected. A flubbed line. A technical miscue. An elderly patron actually walking on stage during a performance and asking the actors to help him find his seat. Sometimes only the cast and crew realized what happened, the audience accepts it as part of the play. Just about anything can happen in a Shakespeare play and the audience accepts it.

For instance there was a very late entrance in WINTER’S TALE leaving an actor to adlib with such dialogue as: ‘The Duke is lateth.’ ‘I am certain the Duke will cometh.” Me thinks I hear the Duke – but he still ist far away.’ ‘Hey, I seeth the Duke.’ The Duke came on and the sweating actor ran off stage. It cracked up the three of us in the booth, but the audience just accepted it.

In a performance of KING LEAR the audience actually accepted the impossible. Edgar and Edmund have a duel that results in Edmund being mortally wounded; but he doesn’t die until he delivers a very important speech to let the audience know of events that happened off stage important to the story.

This time though prior to the fatal thrust Edgar lost the handle on his sword and it went flying into the audience. Edgar, thinking on his feet, grabbed Edmund by the neck; and since he couldn’t stab Edmund to cause his death, he throttled him. Edmund fell to the stage, death by strangulation.

But Edmund, thinking on his back, knowing he still had to deliver his important speech, rose up into a sitting position. He delivered his speech and fell back into his corpse position. Death by strangulation. The audience accepted it without a so much as a snicker; but the three of us in the booth were laughing so hard, we had a hard time doing our cues to get into the next scene.

The other day in a Facebook thread, Lance Davis mentioned that the actors often said it looked like the crew in the booth was having more fun than the cast on the stage, and often it was true. The sound tech, the stage manager, and yours truly, the lighting tech, worked behind glass in a very dimly lit booth beyond the back row of the balcony. The cast could see us but it was hard for the audience to see us. And the glass prevented the sound our cues being called, our talking back and forth, and our laughter.

Back in the day, Lance was a favorite of the Guthrie audiences and the Guthrie family. Eventually he left to spread his wings, tried New York, tried film and TV, and finally decided to go back to his love of acting on stage in classic theater. But times had changed, there was no more getting hired by the season, just being hired by the run of a play. Even the Guthrie dropped it’s repertoire concept of presenting plays and went along with doing a play for a run and then another play for a run. Such a shame.

So Lance and his wife, Mary, founded their own theater, The Parson’s Nose, in Pasadena. It’s motto: ‘Introducing Classic Theater’. Season after season, it receives rave reviews.

Lance was also responsible for one of the greatest adlibs I ever heard.

LANCE BACK IN THE DAY

It was during a performance of Peter Nichols play, THE NATIONAL HEALTH, directed by Michael Langham and with the playwright, Peter Nichols, coming from England to assist Michael. The play is credited with waking up the English government to the fact that if they wanted their new national health system to succeed, they couldn’t do it unless they were willing to spend the necessary money, and not do it on the cheap. They did and today their national health care system is one of the best.

It is a dark comedy about the crowded and inferior conditions in a national hospital. There is also a play within the play, a soap opera set in a hospital. It used a lot of old music hall schtick to get laughs.

Lance wore many hats, an evil orderly in the realistic scenes, a doctor/emcee in the soap opera scenes. As the emcee he carried on a battle with Keane, the cantankerous spot operator who kept the light moving off Lance when Lance tried to talk. An old routine that never failed to get laughs.

Now during this time, Scott the sound tech was having women problems, which for Scott was nothing unusual. But this time it was serious. The current love of Scott’s life, Judith, had left him a note saying she was leaving him to join the hippie commune, the Hog Farm, out in California. It broke Scott up and caused him to screw up badly. Over several performances of NATIONAL HEALTH he played the wrong scene lead in music at times. Sometimes the soapy music would introduce a realistic scene. Sometimes vice versa.

This time, as Lance was going downstage to emcee a soap opera scene, the military music blasted out and Lance stopped and looked up to the booth. Scott realized what he had done and tried to rectify it by playing the soft music on top of the wrong music. A real mess.

When the noise was over, Lance pointed up to the booth and yelled, ‘Alice! You wouldn’t make a sound man for Theater of the Deaf.’

The audience laughed. They thought it was another bit like the wandering spot light. But the cast and the crew knew better.

Two of us in the booth howled. The third person, Scott, didn’t think it was funny at all.

The next morning he thought it even less funny when he got a phone call from Guthrie management. They informed him that in light of his many mistakes recently, they had decided that the next time Scott ever attended a play at the Guthrie, he would need a ticket to get in.

He was devastated. He went to Kaplan’s, bought himself a pair of work gloves and a straw hat. Then he contacted Judith to tell her he was on his way to join her at the Hog Farm. Judith asked him just what part of her leaving him didn’t he understand.

In answer to the question about being bored, no, I never got bored working live entertainment of any genre. Now working on a movie, that was real boredom – well, some of the time. But of all the various jobs I had in my life, being a stage hand those 45 years was the best I could ever have hoped for.

And that’s a wrap.

If you want to know more about THE PARSON’S NOSE, the web page is www.parsonsnose.com. You can follow it on Facebook also. Lance makes certain that he not only informs, he entertains in both.  And if you get a chance to see a play there, be sure and do it. I guarantee you won’t be disappointed in Lance & Company, and the sound cues will be perfect.

Also if you want to know more about the elderly man asking the actors to help him find his seat, the story is in my blog post:ARSENIC AND OLD PEOPLE