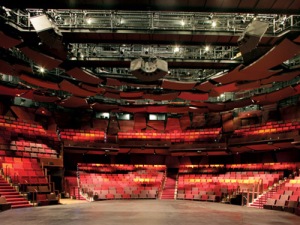 Larry Howard was one of the first hired at Guthrie Theater. He spent over two decades as the daytime stage-door man; but he was so much more. He represented the epitome of the saying ‘everybody loved him.’

When a stranger walked down the down the stage-door steps and heard Larry’s warm and honest question, ‘Can I help you?’, the visitor was quickly put at ease. And he was never a stranger again.

Larry had the uncanny knack of remembering faces and names. It was a valuable asset to a stage-door man, but few had it like Larry.

The first time I ever went to the Guthrie was with Bob Gubbins. Bob had worked in the Guthrie set shop the first season, which was located in the basement of the theater. There was an addition to the Guthrie, a decent shop, that had just opened and Bob wanted to see it.

We had just started down the stairs when Larry welcomed Bob by name. It had been five years since Larry had seen Bob.

I was introduced to Larry that day and two years later when I walked down the steps, my first day as a Guthrie employee, the first words I heard was, ‘Hi, Don. Welcome to the Guthrie. I heard you were hired for the running crew.’ His memory amazed me; but more important, it was the start of a treasured friendship.

I don’t think there was any one of the Guthrie family during Larry’s tenure that didn’t treasure his friendship. For most of us a quick greeting or a short conversation made us happier than we were before. For others, especially younger employees, Larry was a surrogate father. Larry was a listener, not a talker and certainly not a judge. He rarely talked about himself.

And if you were hurting with a few aches and pains, one look at Larry and you stopped feeling sorry for yourself. He moved with slightly hunched shoulders and a painful walk. His knees were shot. It was hard to watch him walk on the level. It was sad to watch him go up or down the stage-door stairs. But no one ever heard him complain.

The first parking spot by the stage-door was Larry’s. There was never any sign that said it was Larry’s. It was just understood that Larry did not need a long walk to and from his car.

David Feldshuh was an actor and associate director at the Guth,Arie. He was close to getting his doctorate in theater. His next project was to get a doctorate in medicine.

He often told Larry that when he got his medical degree, he would see to it that Larry’s problem knees would be taken care of. That promise always brought a smile to Larry’s face.

Those years the polite term for Larry was Afro-American; but Larry was at an age where almost all his life he had been referred to as a Negro or a colored. One of the few times that Larry talked to me about his personal life was an eye-opener to me.

Buffy Sainte-Marie, the Canadian Cree singer/composer had performed two concerts the night before at the Guthrie. Buffy had been the first indigenous performer to break into main stream music. Her protest songs against war, such as The Universal Soldier, and against the treatment of the indigenous people, such as Now That the Buffalo’s Gone, propelled her into the forefront of the protest movement.

Her works soon attracted the attention of President Johnson who led the blacklisting of her music on radio. Nixon followed suit when he became president. And of course, J. Edgar Hoover was investigating her before she became know to the public.

The American Indian Movement, A.I.M, had begun and was headquartered in Minneapolis, wanted her to basically turn the concerts into a rally for their movement. She refused. She felt the audience bought tickets to hear her in concert, not in a protest rally. Her songs would stand by themselves in protest. Plus she had misgivings about the violence associated with A.I.M.. Her refusal did not discourage A.I.M. however. Members demonstrated outside the Guthrie with chants and drums. Some members bought tickets to the concerts and broke into chants during her performance, stopping the concerts several times.

She told them off during her show, criticized them for ruining the show for others; but between shows and afterwards, she cried.

The next day when I said hello to Larry, he commented that he read that his people made fools out of themselves at her concerts. Thinking that he thought it was a Black protest, I quickly ‘corrected’ him. I told him it was A.I.M., that had caused the problem, not his people.

Then he corrected me. He said A.I.M. thought to be an Ojibway movement; also had quite a few Lakota Sioux, his tribe, involved with it.

When I said that I never realized he was part Sioux, he told me his mother was half Lakota Sioux and half French-Canadian. (Since my mother descended from French-Canadians, Larry and I might have been related.) He said his father was half Afro-American and half Scotch- Irish. So Larry was a quarter Native American, more than half Caucasian, and less than a quarter Afro-American.

His father had been a Buffalo Soldier, a Black cavalryman, stationed in Montana Territory where he met Larry’s mother. Upon discharge they moved to North Dakota where Larry was raised. Over the years, Larry told me bits and pieces of his life, but I never pressed so I really did not find out much about his past.

Larry loved sports. He followed the Twins and Vikings on the radio. He was the coach of the Guthrie softball team. He told me that he and his brother had held most of the high school athletic records in North Dakota. Records in football, basketball, baseball, and track and field. They also played semi-pro baseball. His brother pitched. Larry was the catcher, a position that contributed early to his bad knees in later life.

He knew what stations and what time he could listen to his favorites like Basie, Armstrong, and especially the Duke, Duke Ellington.

Michael Langham, the artistic director at the Guthrie, was also an Ellington fan; and when Michael had been artistic director at Stratford Ontario, he had hired Ellington to compose the incidental music for Langham’s production of Shakespeare’s Timon of Athens. The year was 1957, the year after Ellington’s rebirth. The year that saw Ellington’s rise from a ‘jazz composer’ to be recognized as one of America’s great serious composers.

For Christmas of 1973, Michael gave Larry the newly published book, Music Is My Mistress, by Duke Ellington. It was a coffee-table book, rich with pictures of the Duke, his orchestra, and some of the people that Duke had worked with and admired over his 50 years in the Jazz world. Ellington opened by saying the book was not a memoir, it was a performance. It was the kind of book that one could get lost in, over and over. And Larry did, often, and he told Michael so.

The prospect of actually talking to the Duke thrilled Larry to say the least, but Larry knew it was just wishful thinking. Larry’s knees and his overall health wouldn’t allow him to sit for the a concert, no matter how much he would like to.

He thanked Michael, and explained why it couldn’t happen; but asked if maybe Michael could get the Duke to autograph his book.

The distance between the ex Buffalo Soldier’s shanty on the Dakota prairie where young Larry Howard started out and the middle class home in Washington D.C. where young Edward Kennedy,(Duke), Ellington started his life, was far greater than just miles.

About the only thing these two boys had in common in their early years was their love of baseball. Both boys excelled in baseball and both had dreams of someday playing in the Negro League. Larry played before an audience of ranch hands and small town inhabitants. Ellington told of how sometimes President Teddy Roosevelt would stop on his horse back ride and watch him and his friends play baseball.

This is the first of three parts of LARRY & THE DUKE. The second part will follow in a day or so.