He was a friend of presidents and senators. President Johnson declared him a role model for the youth of the day. LBJ was as far off base on James as he was on Viet Nam. He based his observations of Brown on the fact that James went from abject poverty to the top of the music business. And James was also a crusader for education and civil rights, and against drugs, alcohol, violence, racism.  And yet, drugs, alcohol, guns, violence and even stretches in prison were as much a part of his life as his music.

His contradictions is best exemplified in his adoration of the racist hypocrite, Senator Strom Thurmond. He said that Thurmond was ‘like a grandfather to me’.

In spite of all the cons against James, he was the Godfather of Soul, a pioneer in funk, even rap. His concerts were extravagant productions unlike anything ever presented before. And it was his voice that thundered out of our fighting men’s boom boxes throughout the jungles of Viet Nam, giving them an important link to home.

And in spite of the fact, his best days were far behind him, and his current tour was little more that an ‘oldie but goodie’ tour, when I got a chance to work him at Orchestra Hall, I jumped at the chance.

No trucks with equipment and a large set. Just a bus with a small band. Far cry from the 40 to 50 performers that he traveled with during his peak years. Local sound and lights, a minimum set up –  took a little over an hour to set up. The bus and band showed up, but James was flying in later. They worked a gig in Chicago the night before. Jimmy, another stagehand, and I went into the bus to get the band’s uniforms. The bus smelled worse than a locker room. The uniforms were piled on a seat and some spilled onto the floor. They were soaking wet from perspiration that probably included more gigs than just the one the previous night. We went back and got gloves and a rolling launder hamper.

Come sound check, James hadn’t arrived yet. No big deal, the road manager did a good imitation of James. Half hour came, and no James yet. No big deal, it was almost two hours until James had to be on. Show time, and still no James. It was becoming a big deal. The front act went on a comfortable ten minutes late. They played their set, and still no James. It was now officially a Big Deal. When the front act came off after two encores, Larry the promoter, told them to go back on. They said they really didn’t have any more songs to do. Larry told them the audience wouldn’t know the difference. Most of them were out in the lobby drinking while the front act was on. They were quickly  booed off stage and the intermission  started. No James.

Intermission can only last so long. For one thing, the bars were out of beer to sell. For another, most of the audience were back in their seats. No James. There was a rumble of noise coming from the audience. Some foot stomping. No James. The road manager suggesting that the band go on and start playing. Larry nixed that idea. Audiences can get mean. An audience busted up Orchestra Hall a few years before during a David Bromberg concert. And another audience broke up the Guthrie about the same time, when the drummer for Curtis Mayfield failed to show, causing a long delay.

Larry did the right thing. He went on stage. Told the audience the truth. Told them they would wait another fifteen minutes before pulling the plug. At which time, the box office would begin to refund the ticket money. And they would have a two week window to get their money back.

Time was up and we began to tear down lights and sound. First though, we told the band that if they wanted to get out quick, they should take care of their own instruments and uniforms, because it would be quite a while before we got around to it. They took the hint.

About a half hour later, we heard a scream as only James Brown could scream. He bolted down the steps to stage level. He demanded to know what was going on. Larry, the promoter, told him in no certain terms and also that James could expect a lawsuit for costs.

The big guy’s face turned red. Larry pointed out in a very loud voice that this was a long ways from CookCounty, and if they didn’t leave they would be escorted out by a HennepinCounty sheriff. ‘Look,’ the big guy explained, ‘I’m not a sheriff. I’m a Illinois highway patrolman and I picked up some extra bucks as a bodyguard for James last night. He asked if I wanted to come with to Minneapolis. He’d pay. I had a couple days off, so I came along.’

‘Don’t matter what kind of cop he is,’ James screamed. ‘He’ll tell you it was an act of God we didn’t get here on time.’

‘What kind of act of God,’ Larry asked?

‘Well,’ James explained, ‘They told me the flight from Chicago to Minneapolis was twenty minutes. They said it was a ten minute drive from the airport to here. That’s a half hour. I took the eight o’clock flight. That means I should have been here at 8:30. Plenty time for me to get on stage by 9.’

Larry just shook his head and suggested to the big guy to get James out of the theater.

‘Well, tell God he owes me money,’ Larry, said as he walked away.

James was still screaming as the big guy was pulling him up the stairs. I kept waiting for him to drop to his knees like he use to in his act. But he didn’t.

So I never got to see James Brown perform. Although, I was part of a very small audience that heard James scream, ‘an act of God’, as only he could scream. And now I’ll never get to see him perform live. He died on Christmas 2008. An Act of God! 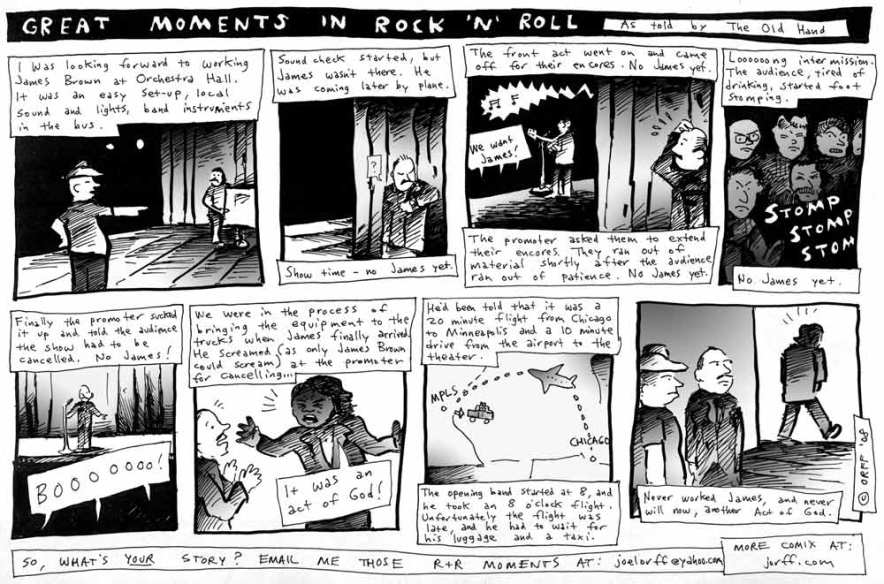 Another great cartoon by the talented Joel Orff