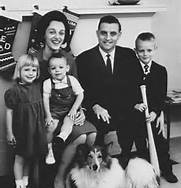 On 4/19/2021 we lost a much admired man, Walter Mondale. He spent many of his 93 years working in public service. He epitomized what a politician should be, honest, hard working, dedicated not only to his views, but mindful of the views of others. He held many public offices including U.S. Senator and Vice President.

The son of a preacher man, he was religious in the true sense. Rather than preaching his religion to others, he practiced his religion in deeds. He cared. He was a role model for many and admired even by those who did not share his political agenda. He was a devoted family man

He stuck by his views both in talk and deeds. For instance, he was a strong advocate for the ERA rights Amendment, equal rights fort women. He was the first U.S. presidential candidate to select a woman, Geraldine Ferraro, as his running mate.

I never had the pleasure of working Walter Monday, but I did have a delightful time with his wife, Joan, and two of his children, Eleanor and William. This is the blog post I wrote shortly after Joan Mondale died on 2/3/2014.

Because Walter Mondale had been out of the national limelight for a while, the death of his wife, Joan, received only a slight notice in the press outside of Minnesota. Mostly tied in with the fact she was the wife of Walter, ‘Fritz’, Mondale.   She deserved more than that just on the basis of her own life.

She was an artist, author, and patron and defender the Arts. She was dubbed Joan of Art, by the national press. Many of the her projects, such as establishing a gallery of American Artists, in the Vice Presidential Mansion are still monuments to her work in the Arts.

My encounter with Joan Mondale took place when her husband was campaigning for the Vice Presidency under Jimmy Carter, and I was working at the Guthrie Theater.

She was attending a gala at the Walker Art Center, which was attached to the Guthrie. Her two youngest children, Eleanor and William, teenagers at the time, wanted to see the play at the Guthrie instead going to the hoopla.

Jon, the Guthrie Production Stage Manager, brought them up to the booth and told us the two kids would be watching the play from the booth. He showed some chairs to the left of the stage manager. Eleanor, noticing the chair to the right of my lighting board, announced she was going to sit there. Jon managed to crack a smile and as he went to leave, he commented that if they had any questions, ‘Just ask Don. He’s our resident babysitter.’ He was referring to the fact that I often brought children to watch the shows from the chair Eleanor had taken, something he really didn’t approve of.

‘What’s he? The resident clown?,’ Eleanor asked me, loud enough for Jon to hear as he walked to the door.

At intermission, William had many questions. When I explained how the lighting board worked and he said he thought I had a ‘cool’ job. Eleanor said she was going to be an actress; and after she made it big in the movies, she would come back and act at the Guthrie. William rolled his eyes. I certainly couldn’t disagree with her. She seemed to be a young lady who would work hard for what she wanted.

When the play finished I had some work to do in the attic, to prepare for a different play the next evening. William asked if he could go along and I said come on

He and Eleanor followed me up the ladder to the catwalks where I changed some gel colors and replugged some lighting instruments. I brought them down into some lighting coves and showed how the lights were pointed to a specific area on the stage. We could see Joey B. and the shifting crew working below, changing one set for the other. William thought that was ‘cool’ also.

Jon walked on stage with Mrs. Mondale. He hollered at me, telling me Mrs. Mondale was here for the children and wanted to know where they were. At the mention of ‘the children’, Eleanor muttered, ‘The clown in residence!’ I hollered down that they were with me in the attic and we’d be down in a few minutes.

At the mention of the two being up top with me, Jon began to bellow. How could I be so crazy as to place the children of the next Vice President of the United States in danger? The two kids both shouted to tell their mother that it wasn’t dangerous. Jon kept it up. I bellowed back that if it was so dangerous, maybe I should be drawing hazardous duty pay along with my wages. I could hear Joey B. and the shifting crew laugh.

When the three of us made it down to the stage, Jon kept up his harangue. How could I make Mrs. Mondale wait? She’s got important things to do. She was too important to have to wait on me. I should apologize to her for making her wait and for placing her children in danger. And if he had known that I was going to screw up so bad, he would have babysat the children himself. Both Eleanor and William came to my defense, and Mrs. Mondale said she didn’t mind waiting.

Jon didn’t seem to hear them. He was having too much fun showing off. He knew I wouldn’t give him an argument in front of the Mondales. Joey B. and the shifters weren’t too sure though, and they stopped working and waited for me to order Jon off the stage. He was crossing too many lines, including the fact he was acting like he was my boss, which he wasn’t.

He was also upsetting Eleanor; and she began to walk toward him, when her mother stopped her. Then, Mrs. Mondale shook my hand and thanked me for giving her children an experience in theater that they would never forget. And she added, ‘If I didn’t have high-heels on, I would ask you to take me up and show me the catwalks.’

Then she turned to Jon, the silent one, and she commented, ‘Do you have any teenagers, Jon?’

‘I thought as much,’ she said, and went off stage, followed by the children, into the center aisle that led to the lobby. She turned and waved goodbye to Joey B. and the shifting crew. So did Eleanor and William, who both hollered out thanks to me. Jon followed.

‘Hey, Jon,’ I shouted, ‘When you can, come on back. You and me have to talk.’ Joey B. and the  shifters laughed; but Jon didn’t acknowledge my request. In fact, he stayed out of my way for several days.

Joan Mondale was a ‘dutiful’ political wife. She did everything right as her husband, Walter, rose from Minnesota Attorney General, to U.S. Senator, U.S Vice President, Democratic nominee for President, Ambassador to Japan.

Well, she did have one glitch. In an interview, she requested that she not be asked, like most politicians’ wives, what her favorite recipe was. To atone for this supposed slam at American homemakers, she quickly released a book containing ‘all her favorite recipes’, her PR people thought would go well with the Mrs. Cleavers of America.

And she suffered when Walter was trounced by Ronald Reagan in election of 1984. And years later when he was nosed out by Norm Coleman in the race for the U.S Senate vacated by the death of Paul Wellstone, just eleven days prior to the election.

Joan Mondale, the mother, saw her three children become successful. Both Ted and William went into the political and private sectors. Eleanor, as she promised, tried Hollywood, and then into talk radio in Chicago and later Minneapolis. She was a tabloid celeb, dubbed the ‘wild child’. Then at the age of 40, Eleanor was diagnosed with brain cancer. She fought it for 11 years and died at the age of 51. Every time I think of Eleanor, I remember her comment, ‘Who is he? The resident clown?’

And now reading about the death of Joan Mondale, I remember a kind and intelligent woman, a politician in her own right, and a good mother. And often wished she had changed her shoes and came back to the Guthrie so I could have given her a tour of the Guthrie catwalks.